A world first will be taking place this month when a full week of African documentary films are broadcast across sub-Saharan Africa on DStv channel ED (channel 190) and GOtv (channel 65), from the Durban International Film Festival, the largest film festival in South Africa that takes place from 17 to 27 July.

So many documentary films have been shot in Africa, but very few have been seen by African audiences. This heralds a new era of distribution for the continent.

Films by African filmmakers Sani Elhadj Magori, Licinio Azevedo, Rehad Desai, Judy Kibinge, Andrey Samoute Diarra, Annalet Steenkamp and Mandy Jacobson together with filmmakers Mika Karismäki, Thierry Michel, Roger Ross Williams, Abby Ginzberg and Göran Olsson amongst others, will be seen for the first time by a wide audience as a result of this collaboration.

Seven of the films screening at the Durban International Film Festival (DIFF) will also be part of the programme, including the award-winning Miners Shot Down, Concerning Violence, I Afrikaner, The Irresistible Rise of Moïse Katumbi and Soft Vengeance.

These African documentaries tell a wide range of stories; from films about great African artists, such as singer and activist Miriam Makeba (Mama Africa) and the Malian photographer Malik Sibidé (Dolce Vita Africana), to political and historical films about leaders Patrice Lumumba and Liberian President Sirleaf Johnson, as well as films dealing with revolutionaries, farmers, gangsters, musicians and evangelists.

This week-long film event is a special broadcast project from AfriDocs, the first weekly primetime documentary strand broadcasting across Africa. Every Tuesday night on ED (DStv channel 190) and GOtv (channel 65), AfriDocs broadcasts top African documentaries to 49 countries by satellite, and terrestrially to an additional 100 cities in 8 countries.

Rebecca Lichtenfeld, Director of Social Impact Media at Bertha Philanthropies, said that the Bertha Foundation is proud to partner with Steps to help bring great documentary films to audiences across Africa.

Connecting documentary film to African audiences is something we have been hoping to do for some time now, and this is an ideal platform for that.

To find out what’s showing during the AfriDocs Film Week (Film Festival on Your Screen):

Use this online tv schedule at www.afridocs.net/tv-schedule. 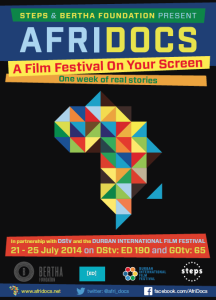